I have created 25 boxes of random width and height, where width = height (as shown)

Each div has the following css:

I am trying to better understand the float property logic and the reasoning behind the positioning of floating elements when they "stack" on each other. for instance (screenshots taken from fiddle):

What makes 3_3 relocate to the position as shown below when the screen is made bigger?

If you place several floating elements after each other, they will float next to each other if there is room.

So the question is, what does "room" mean and what is the logic which governs the location of floated elements?

The answer to this SO post: CSS Float explanation appears relevant, however it doesn't seem to explain why a floated element stops at a certain location.

Here's the part of the linked answer that's most relevant to your question:

When you float a block element, you are telling the browser to position it next to the previous floated object, so long as the container is wide enough (otherwise it will drop below the previous object).

As the author mentions this is a crude simplification. Section 9.5.1 of the spec has a list of all the precise rules, but I'm not going to quote the entire thing here as it is a very long read and only certain points are relevant here. I'll quote the relevant points as I step through exactly what is happening in your fiddle. 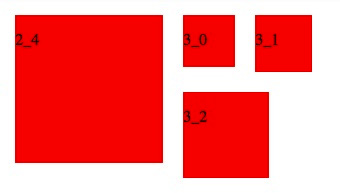 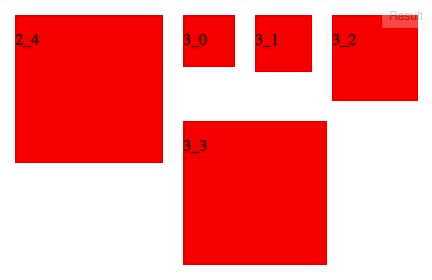 When the screen is made bigger, you make room for 3_2 to move from its original position next to 2_4, upward and next to 3_1:

This in turn makes room for the next floating box to occupy the space as far up top and as far to the left as possible, following the same rule as above. As a result, 3_3 floats up, stopping just shy of 3_2, then it floats as far to the left as possible along the horizontal axis, stopping just shy of 2_4. Notice that even though it seems like 3_3 should be able to fit between 2_4 and 3_2, it does not, because the margins have to be respected (this is what is meant by "outer edge" above).

At this point, the following items apply, in addition to items #8 and #9 above:

As 3_3 is so large, it creates a noticeable downward protrusion from the first line of floating boxes. This effectively increases the height of the first line. All the other floating elements following 3_3 must remain on their own line, and this second line of floats must not intersect the bottom margin edge of 3_3. This is mostly governed by item #5.

why i don't get return value javascript


How do I display my mysql table column headers in my php/html output?


php,html,mysql,table,data
2 Questions... Scenario: I would like to query my database table via a form and then display the results that occur(if there are results) and my current situation is that it does work but it clears the form completely and leaves my to an empty page with just the results...


Div with the form of a pencil [duplicate]


html,css,css-shapes
This question already has an answer here: CSS triangle custom border color 2 answers How can i create a div with the form of a pencil, just like this: It seems a basic thing but im trying to do it since some time ago and still couldnt do it....


javascript,css,google-maps,google-maps-api-3
I'm not using the Markers in Google Maps because I wish to render custom text and images on my marker, so what I did is a custom marker using Overlays. The Overlay position is not exactly like the marker so I played a bit with it and now it is...


CSS :hover that shows more than one image


html,css,css3
I have an icon on my website. I want to change the icon to 4 different images when ever I hover over the first one. So I know how to switch between the regilar image to yellow0.png, but how do I continue to the next one (after half a second...


Automatically calling server side class without


javascript,html,ajax
I have an anchor which calls a server side class when clicked, but I want to modify it so that the class is called as soon as the page loads, without having to click an anchor. <a href="#" class="_repLikeMore" data-id="1234" data-type="pid" data-app="forums"> ...


php,html,select,drop-down-menu
I have a dynamically generated dropdown list - list of course identifiers and names. On the basis of a variable, “assigned_course_id”, I would like to preselect the appropriate value from the dropdown list. My best attempt is as follows. Thanks in advance for your assistance. <select name="course_id" id="course_id"> <?php $assigned_course_id...


show/hide an overflow div on anchor


javascript,jquery,html,scroll
I'm trying to make a div appear (if not already visible) and be scrolled to a specific anchor. I found this answer and try to use it but it looks like it doesn't work well... http://stackoverflow.com/a/7513110/3703099 My code : http://jsfiddle.net/0sq2rfcx/9/ As you can see, when you click on button it...


css,wordpress,html-lists
I am adding some pages on a wordpress themed website. There is a table with 3 columns: 1st column will be the title (larger font). Since it looks better and editing is easier, I started using <ul> instead of <td> Even though it works fine on JSFIDDLE font-size on the...


html,css
I'm quering a MySQL database and use a script to put results into an automatically generated HTML-file. I have two tables with 2 columns and 4 rows each that need to be put side-by-side. I have put my html & css in fiddle. http://jsfiddle.net/mika6891/7b0k049r/1/ My HTML code: <!-- gene description...


html,css,twitter-bootstrap,flexbox
I am terrible at CSS so I am having trouble centering my <li> (navbar pills) vertically for my navbar. This navbar is from twitter bootstrap Here is the HTML for my navbar: <div class="container"> <nav class="navbar navbar-default navbar-fixed-top"> <ul id="nav_pills" class="nav nav-pills" role="tablist"> <li role="presentation"> <a href="/">About</a> </li> <li role="presentation">...


javascript,jquery,html,css
I am dynamically creating submit buttons using javascript. I wanted to know how to introduce horizontal spacing between every other button in the process. My code is var allFields = commonButtons.concat(extraFields); for (var i = 0; i < allFields.length; i++) { var node = document.createElement("input"); var btName = document.getElementById("submit-buttons"); node.setAttribute('data-value',...


Detect when the jQuery UI slider is being moved?


jquery,html,css,jquery-ui
I have this custom video time UI slider to change the time of the YouTube video when scrubbed. My problem is that when the video is trying to load when the user is moving the slider, it causes the handle to jerk around and flip around. What I'm trying to...


html,css
I made a website for one of my clients, and I change the background and font color. Now on windows xp and smartphones the background changed color to the default color and the fonts remained the same. The website is simfest.ro I don't know what to do to make it...


html,css
Pretty new to CSS and just having quite a bit of trouble, I've tried everything, searched here, but can't seem to make it work. Right now my header/body are both 70% of the screen. However I want my top header (.mainheader) to be 100% of the screen, but have the...


How to set DIV's width based on CSS indexes


html,css
I have 6 floated DIVs in two rows. I use PocketGrid as CSS framework (in particular its "automatic rows" feature) and I would like to size each one using CSS indexes and not specific class name. I tried it in this jsFiddle but even if first 3 blocks (first row)...


Click on link next link should be display on same page


javascript,php,jquery,html,css3
I have a single page website and need to link the navigation to IDs in the page. I have three links: "About us", "Our Project", "contact". So if user clicks on "About ", the About section will be displayed, same with other links. Inside Our project there is Two buttons...


html,css,css3
I want to apply css3 gradient (left and right transparent) background color for a TR element like below. Below code is working fine if it has only one TD element, where as more than one td, background gradient started repeating for each td... Am I missing something? Online Demo CSS...


Target next instance of an element/div


javascript,jquery,html
I have the following HTML structure and JavaScript file: .html <li> <button class="show-more"></button> some more elements <div class="hidden"></div> </li> JavaScript $( ".show-more" ).click(function() { event.preventDefault(); $( this ).next().slideToggle( "fast", function() { }); }); I need the click event to toggle the next first instance of .hidden, however the click event...


How to remove all the borders of a selectbox?


jquery,html,css,drop-down-menu
How can I remove the all the borders of the selectbox using css or Jquery ? My code, <select id="doctor_ch"> <option value="1" selected>One</option> <option value="2">Two</option> </select> CSS #doctor_ch{ background-color: #88AFF2; color:#fff; margin-top: 15px; } When I use this code it only changes the arrow style. I want to remove the...


How to make background body overlay when use twitter-bootstrap popover?


How to remove unmatched row in html table using jquery


Get elements containing text from array


javascript,jquery,html,arrays,contains
I want to search all the elements containing any string in the array. For example I have following list of items <ul> <li>cricket bat</li> <li>tennis ball</li> <li>golf ball</li> <li>hockey stick</li> </ul> and this array var arr = ['bat', 'ball']; It should select all the elements having text bat and ball....


javascript,html,css,image
I have two images side-by-side within a block-level container with arbitrarily different dimensions (as in, they could be any two images) that I want to dynamically adjust the width of so that the overall height of the two images is the same. I don't think this can be done in...


show div only when printing


javascript,html,css
Let's say that I have <div id="printOnly"> <b>Title</b> <p> Printing content </p> </div> Is it possible to hide this div when page rendering and to show only when printing this div?...


Background-image style with JS not working in ie9


javascript,jquery,html,internet-explorer
I'm working on a site and im having some issues with my slider in IE9. What I've done is that I've made a div that gets the background image changed every few seconds depending on the img tags within. You can see it in function here: http://diakondk.quine.pil.dk/ It works wonders...


How To Check Value Of String


javascript,jquery,html
I have a table cell that lights up when selected. There will be many buttons on the page but only one choice can be made at a time. How can I make them mutually exclusive using hidden input radio tags? (in order to handle the group later) <td class="choice-option"> <input...