IBOutlet does not display its value in UI


I am building an iOS app using storyboards.I have implemented google maps in my app using swift and rest of the code is in objective C.

2.In the map view controllers, when the user moves the map with touch, I'm getting address value in a label. ( similar to uber app )

3.After this , as soon as user presses done button on this controller, it gets back to the first view controller using custom segue and with the value of the location. 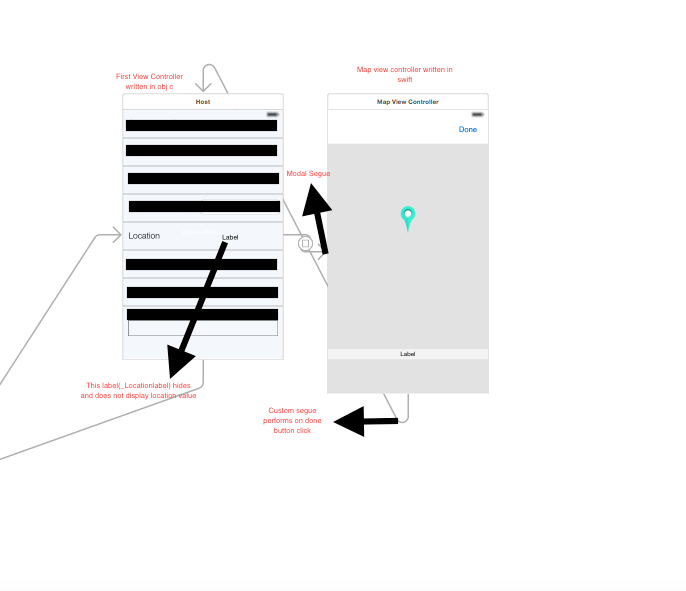 The problem is that, iboulet of this label is hidden in the UI and doesn’t display its value. But when I print this value in console, I am able to display the value.

Below is my code. Help is much appreciated.

Then you'd control drag from the Done button in your Map View Controller to the orange exit icon in the bar above the view controller in the Storyboard. In the pop up, you'd select backFromMapView and voila, you're done. 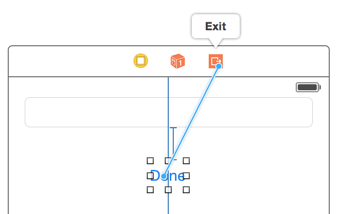 UITapGestureRecognizer sender is the gesture, not the ui object


How to get time difference based on GMT on Swift


ios,swift
I am trying to get a time difference based on a GMT time. where at the end of everyday the timer resets to zero. I've tried the below code on the Xcode simulator and every time i change the time on the mac, the difference also changes. how can i...


How to disable the Copy/Hide feature in UIImagePickerController when long pressing a image …?


ios,swift,ios8,uiimagepickercontroller,ios8.3
- Actually am using UIImagePickerController for my usecase,and if i long press any picture ,it shows Copy/Hide option (as shown in the sample image) - I dont want the Copy/Hide feature. Guide me with some suggestions if u too have encountered :)... Thanks in advance...iOS Geeks...PLZ refer my code snippet...


Transferring an Xcode project to another computer with all files/frameworks


ios,xcode,frameworks,transfer,projects
I am trying to copy over my Xcode project from one computer to another but it seems to lose frameworks and the locations for the images although i copied those too. PS I am using xcode and coding an app with a friend. Is there a useful source that can...


App crashes when i start typing in uiseachbar in uitableview


ios
I am making a project in which i am fetching addressbook in my tableview with the help of NSObject class. Now , I allocated a UISearchbar in it , but when i start typing , the app crashes with the following error :---- 'Can't use in/contains operator with collection (not...


objective-c,cocoa,nstextfield,autoresize,nscursor
I have an NSTextField that autoresizes. Its text is centered. When I start typing in the field and then resize the enclosing NSWindow, the cursor stays where it's at rather than repositioning to the appropriate place : I've also made an XCode project demonstrating this problem : https://www.dropbox.com/sh/cohhmslyl9ti43b/AAC6ULteopsQCMDsEArJU15Ta?dl=0 Does anyone...


What is the best practice add video background view?


ios,objective-c,swift,video
I want to add background view with video (or gif) like in app "Uber" I'd like to use video background view for a long time in my app. And I want to know the answers to these questions: What of them will consume less battery energy Can I use it...


iOS: What is the callback when tapped on the empty space between keyboard and search bar to dismiss the keyboard when search bar is active


ios,objective-c,swift
I have SearchController for my TableViewController. I wanted to perform some actions when user taps on the empty space on the screen (between the keyboard and search bar) to dismisses the keyboard and displays the main Table View.


ios,uitableview
I made a custom cell from my storyboard, with an UIImageView and a UILabel. Each of them have a tag 100 for the imageView and 102 for UILabel. I try to get them in my datasource method but as below, they are still nil and I don't know why. ...


Adding Image And title both to UIsegmentControl IOS


ios,unity3d,shader,mesh,particle
How to draw each a vertex of a mesh as a circle?


ios,swift
I just started learning Swift with Stanford tutorial. I have Xcode 6.3.2. I'm getting a bug at a switch operation and can't understand how to solve it. I attached a screenshot as well @IBAction func operate(sender: UIButton) { let operation = sender.currentTitle! if userIsInTheMiddleOfTypingANumber{ enter() } switch operation{ case "➕":...


ios,swift,applovin
I would like some help with integrating interstitial ads from Applovin using Swift. Currently, I have managed to successfully integrate the SDK and initialize it using ALSdk.initializeSdk(). I have a folder in my project directory called Applovin which contains: headers folder (with all the .h files inside) and libApplovinSdk.a. I...


ios,uitabbarcontroller,auto-rotation,shouldstartload
I have a UITabBarViewController that contains 5 tabs and a login view which is not part of my tab bar, in my settings I have set that I support all device orientations. but when I run my app, only my login view is the only which rotates. I have created...


ios,swift,uitableview,cocoa-touch,ios-charts
I am working on a project where I have a table view which contains a number of cells with pretty complex content. It will be between usually not more than two, but in exceptions up to - lets say - 30 of them. Each of these complex cells contain a...


Getting video from Asset Catalog using On Demand ressources


ios,xcode,xcode7,ios9,asset-catalog
I attributed to my .mp4 video the "tokyo" tag for example, and set it as installed during the app installation. Now before I was using a Path to get it from my resources, now it's different because it's located on the Asset Catalog. After found documentations, I tried something like...


Do I have to use both of these methods?


ios,swift,uitableview
When I expand a UITableViewCell on touch, I know I have to update the UITableView. Right now I'm doing: tableView.beginUpdates() tableView.reloadRowsAtIndexPaths(indexPaths, withRowAnimation: UITableViewRowAnimation.Automatic) tableView.endUpdates() Do I need to use both updates methods as well as the reload method? Or is it just one or the other? I'm not completely understanding,...


SpriteKit collision angle of line and circle is odd


ios,sprite-kit,skphysicsbody
Suppose a circle is enclosed in a diamond, and the circle heads due right. I would expect a series of continual 90 degree angles as the circle draws a square within the diamond. What I'm seeing, however, is that the circle eventually gets pushed toward the center of the diamond...


Characters and Strings in Swift


ios,objective-c,asynchronous,uiviewcontroller,nsobject
In my app I init a new object, where there is method which calls NSURLConnection's sendAsynchronousRequest method. After the request, I would like to call a method in the caller UIViewController. I tried to use a static method but I then I can't control IBOutlets. How can I do this?...


How can I fix crash when tap to select row after scrolling the tableview?


ios,xcode,swift,uitableview,tableviewcell
I have a table view like this: when the user tap one row, I want uncheck the last row and check the selected row. So I wrote my code like this: (for example my lastselected = 0) func tableView(tableView: UITableView, didSelectRowAtIndexPath indexPath: NSIndexPath) { var lastIndexPath:NSIndexPath = NSIndexPath(forRow: lastSelected, inSection:...


ios,objective-c
I have this methods for draw a table ant populated . What i want is to change the color for one word from each column , but i dont know how can i do it . Can somebeday help me ,please ? Any help will be appreciate . in my...


ios,objective-c,uitabbarcontroller
I'm using a standard UITabBarController with icons at the bottom, each bringing to it's ownViewController. My question is basically: Is there a way to override what happens when an icon is selected rather then directly bringing them to the view? Reason being is because I'm adding a login screen to...


Build error after I localized Info.plist


ios,objective-c,xcode,swift,localization
I localized Info.plist : And I got this build error : error: could not read data from '/Users/cherif/Apps/Wesh/Info.plist': The file “Info.plist” couldn’t be opened because there is no such file. Actually there are now two Info.plist files : fr.lproj/Info.plist Base.lproj/Info.plist How to localize the Info.plist path ?...


NS_ENUM as property in protocol


animating a view on top of uitableview


ios,swift,autolayout
I have a UINavigationController that has my custom ViewController with a tableView in it that takes up the whole screen. I want to push down the tableView and reveal a settings menu with just a couple items. My SettingsView.xib I created in a separate nib that is 320 x 90...


After an insert into the UITableView : custom the cell


How can I show ONLY the date (and not the time) using NSDateFormatter?


ios,iphone,swift
I think the question is pretty straightforward. I need only the date to appear, and not the time. Couldn't find anything for Swift, so my code is here: cell.date.text = NSDateFormatter.localizedStringFromDate(dates[indexPath.row], dateStyle: .ShortStyle, timeStyle: .ShortStyle) ...


Is it possible to obtain an unique iCloud user ID on cocoa?


ios,iphone,cocoa,ipad,icloud
My iOS app is currently on beta in TestFlight, and as a way to retribute to the nice people who helped me test it I would like to offer them some goodies such as, for instance, the full final version of the app for free. For this, I was thinking...


Difference between stringByAppendingString and appendString in ios


ios,objective-c,swift,nsstring,nsmutablestring
What is the difference between stringByAppendingString and appendString? If NSString is not mutable then how could it append string?


Scaling everything up and down for different devices in UIStoryboard


ios,uistoryboard
Is it possible to have the storyboard scale everything up or down depending on the screen size or do I have to do it programmatically? For example the UI on iPhone 6 plus would look exactly like the one on iPhone 5 but just larger.


ios,uitableview,autolayout
im trying to build apps that have tableview cell similiar with twitter, there are text and images. My problem is i want to insert the image above the text. While it can be text only. So if there are no image, the text will be in position (0,0). And if...


javascript,python,ios,flask,twilio
I have created a simple twilio client application to make phone calls from Web Browser to phones. I used a sample Flask app to generate a secure Capability Token and used twilio.min.js library to handle calls from my HTML. The functionality works fine in Computer Browsers ans Android Phone Browsers,...